Swan Pond is a 2-acre pond formed near the headwaters of Meadow Brook in Springfield, Massachusetts, within the city’s 734-acre Forest Park. The Main Greeting Road into Forest Park crosses the 45 foot tall earthen embankment that forms Swan Pond, functioning as a dam across Meadow Brook. The pond’s spillway is a drop inlet structure at the upstream toe of the road embankment that connected to a conduit that passed through the embankment.

In the summer of 2017, City crews noticed that the water level within Swan Pond was several feet higher than normal. GZA was called to investigate and, based on observations at that time, informed the City that the conduit through the embankment was partially or even fully blocked, and in the short term, the hydraulic load on the embankment needed to be reduced immediately. Based on GZA’s urgent recommendation, the City took immediate action, and the road was closed that evening. 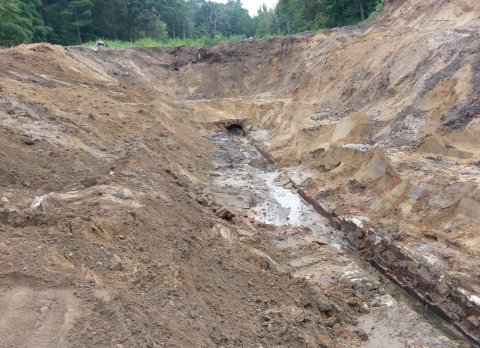 GZA designed an emergency bypass pumping system for Meadow Brook, which was procured by the City while GZA planned and implemented a program of exploratory soil borings within the Main Greeting Road embankment. These borings and other field investigations provided data to guide the evaluation and design of permanent remedial actions.

Within four weeks of initial notification, GZA conducted the investigations, identified a working hypothesis for the conduit failure, and conceived a repair program and a preliminary opinion of $3.0 million in total project costs. The Commonwealth of Massachusetts, under the leadership of Governor Charlie Baker, provided a $3 million grant from the State Department of Energy and Environmental Affairs to see the project through to completion. With project funding thus secured and the acquired data in hand, GZA embarked on the design and permitting of the permanent repair program.

In its research, GZA discovered a Springfield Republican newspaper article from July 19, 1855, describing the conduit’s original construction in vivid detail. Shallow test excavations revealed the downstream portion of the culvert was constructed of stone masonry sidewalls with a cracked stone slab top. This confirmed that the conduit was 165 years of age and likely beyond repair.

Several project alternatives were considered, including pipe jacking a new conduit, cleaning and lining the existing conduit, and complete conduit replacement along the original alignment. Heeding technical guidance from FEMA and the U.S. Army Corps of Engineers, the City elected to implement GZA’s recommendations for complete conduit replacement by unearthing and removing the collapsed conduit and replacing with a ductile iron pipe culvert. 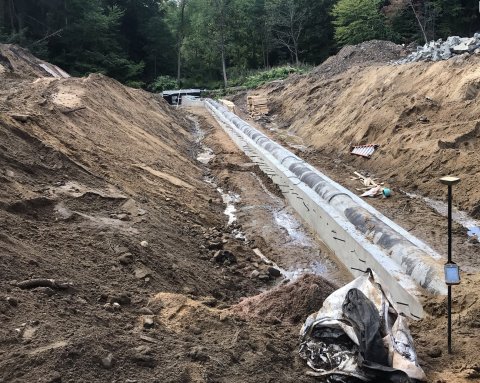 Work began in earnest in the spring of 2019 and proceeded throughout the summer. Ultimately, upon full excavation of the 45-foot embankment and removal of the collapsed conduit, the original construction was found to mostly consist of brick masonry sidewalls and arched top, founded on thick wooden planks laid crosswise to the direction of flow. Requiring over 120,000 cubic yards of excavation and embankment formation, the conduit replacement project was completed on-time and on-budget.

The road was re-opened to traffic in November 2019, just in time for the City’s annual “Bright Nights at Forest Park” celebration, where 200,000 people each year enjoy a self-guided drive through a darkened Forest Park to enjoy an incredible display of holiday lights.  As Springfield Mayor Domenic J. Sarno said at project completion, “I am pleased to announce the reopening of Forest Park’s Main Greeting Road.  This immense project was completed on time and on budget, and I am excited that the conduit repair has been successful so that the many visitors to Forest Park will have an accessible and scenic entrance to this wonderful park.”