GZA's "One Company" Approach To Cleaning Up the Connecticut River

At the end of September, three GZA offices pitched in for the Connecticut River Conservancy’s (CRC) Source to Sea Clean-Up - a yearly trash cleanup of the Connecticut River system. The river flows through four of New England's six states, and that makes keeping it clean a regional effort.

Each fall, volunteer group leaders coordinate local cleanup sites where thousands of participants of all ages and abilities spend a few hours picking up trash. CRC uses trash data collected during the cleanup to support legislation and other efforts of keeping trash out of our rivers.

This year, GZA participated, not only as a sponsor, but assembled 3 Office Teams for the event – Glastonbury, led by Chris Frey; Bedford, led by Matt Deane; and Springfield, led by Nat Arai.

Here’s what the Team Leaders have to say:

Question:  How do you get more than 60 tires out of the River and up an embankment?

Answer:  Very carefully –  with a little help from a  consultant’s winch and  cable.

GZA’s Glastonbury Connecticut office led a cleanup event this year as part of the Connecticut River Conservancy’s annual Source to Sea     cleanup program. The selected area was the east bank of the Jeremy River, below a park & ride commuter lot, that also serves as an entrance to a portion of the Air Line State Park Trail.  A survey of the area prior to the event found that more than 60 tires had been  dumped down the steep wooded hill side above the river as well as the presence of an assortment of trash.

Because of the number of tires found and the steep terrain,GZA reached out and teamed up with three other companies: Benesch Engineering Company, Cisco Geotechnical Drilling, and Lakin Tire. More than 30 personnel and family members participated in the event.  Cisco provided a Schmeil drilling rig with a winch and cable that was used to haul the tires up the steep hillside. Volunteers also spread out and collected trash and dumped debris along a 1 to 2 mile of   section of the Air Line Trail above the river. The event was completed in 2 hours, and in the end, 61 tires were recovered. 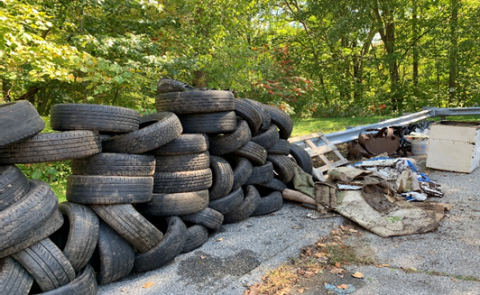 In addition several hundred pounds of trash and waste materials were collected, including carpet, tiles, a portion of a washing machine, an empty 55-gallon drum, and the regular assortment of bottles, cans, paper and plastic. Thanks to the GZA staff that participated include: Chris Frey (& son), Tina Sullivan (& daughter), Steve Lecco, May Williams (& daughter), Adam Henry, Chris Mayne, James Davis, and Barbara Rizner (& daughter).

The GZA New Hampshire team spent approximately three hours cleaning up two sites along the Whetstone Brook, a tributary of the Connecticut River, in Brattleboro, VT. Our sites were segments of the Whetstone located behind the New England Youth Theater and the Brattleboro Food Coop. Team members included Matt Deane, Tracy Tarr, Deb Zarta Gier, Lindsey White, Muriel Robinette (Bedford), Alyssa Noyes (Amesbury), and Andrew Hummers (Keene). We also had some non-GZA participants including Kathy Urffer of the CT River Conservancy, and 3 to 4 local members of the general public.

The weather was perfect for working outdoors, nice and sunny. We broke into two teams, one team was responsible for picking and bagging trash and recycling, and another smaller team transported the trash and recycling via car to a roll-off dumpster provided by the Windham Solid Waste Management District. All in all, we picked up and disposed of roughly 25 large trash bags worth of trash and recycling from these two sites. 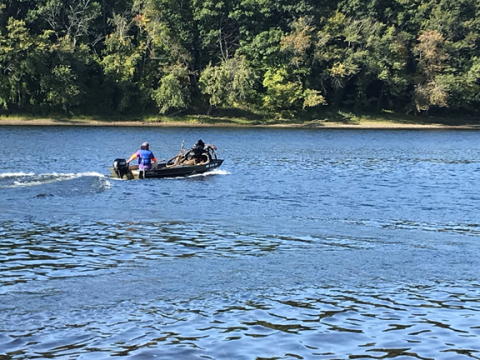 The GZA Massachusetts Source-to-Sea Connecticut River Clean-up team included Springfield Office staff members Nat Arai, Jackie Claver, Nate Gosselin, Nolan Fonda, and Guy Dalton, along with two community volunteers who appeared on the morning of the event.  Our team worked on a ¾ mile reach of the left bank of the Connecticut River at the confluence of the Chicopee River in Chicopee, Massachusetts, and was staged at the public boat ramp adjacent to the Massachusetts Turnpike (I-90) bridge abutment from which we launched by foot and with the Springfield Office’s work boat.

We arrived on a beautiful early fall morning and were unexpectedly greeted by Andy Fisk, Executive Director of the Connecticut River Conservancy (CRC), who came to check in and ensure that we were prepared and to answer any questions about the task at hand.

We formed two teams, one each to work upstream and downstream of the confluence with the Chicopee River.  Nolan Fonda piloted to boat to patrol for and pick up piles of team-collected refuse and then ferried them back to the boat ramp.  The Springfield Office’s pick-up truck was stationed at the boat ramp and was packed full with two loads of refuse.  The CRC had an arrangement with the local trash-to-energy plant in Agawam, MA for teams to bring their collections of refuse.  Jackie and Nat took the first load and, upon arrival, our collection was offloaded, but we were told that they would be closing before we could return with our second load.  The CRC found another location, a nearby dumpster owned by a local trash and recycling hauler. 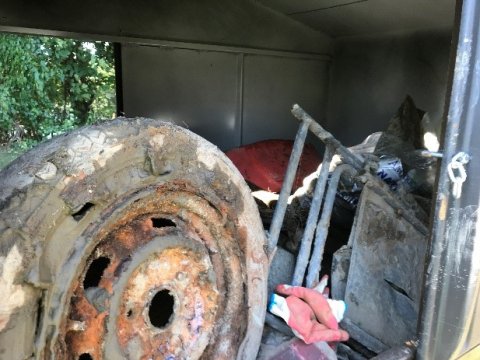 We worked for a total of about 5 hours, took the first load to the trash-to-energy plant, packed the truck with the second load, packed up the boat, and took a lunch break.  We all called it a day.  Nolan and Nate returned the boat to our storage unit in West Springfield, battling Eastern States Exposition (“Big E”) traffic all the way, while Guy and Nat took the last load to the dumpster.  We collected and delivered about 800 to 900 lbs. of refuse, including about a dozen tires.  A successful day!