In early November, I attended the King Tide 2021 Tour organized by Consulting Planners of Massachusetts (CPM) to discuss the effects of climate change, rising sea levels and tidal activity at the waterfront in Boston. A King Tide is a natural phenomenon where higher than average tides occur when the sun, the moon, and the earth are in a perfect line. The phenomenon happens 3 to 4 times a year, and the increase in sea level can reach upwards of 12 feet above the Mean Lower Low Water (MLLW) level. It should be noted that the Mean Higher High Water (MHHW) in Boston is 10 feet in reference to the MLLW level. 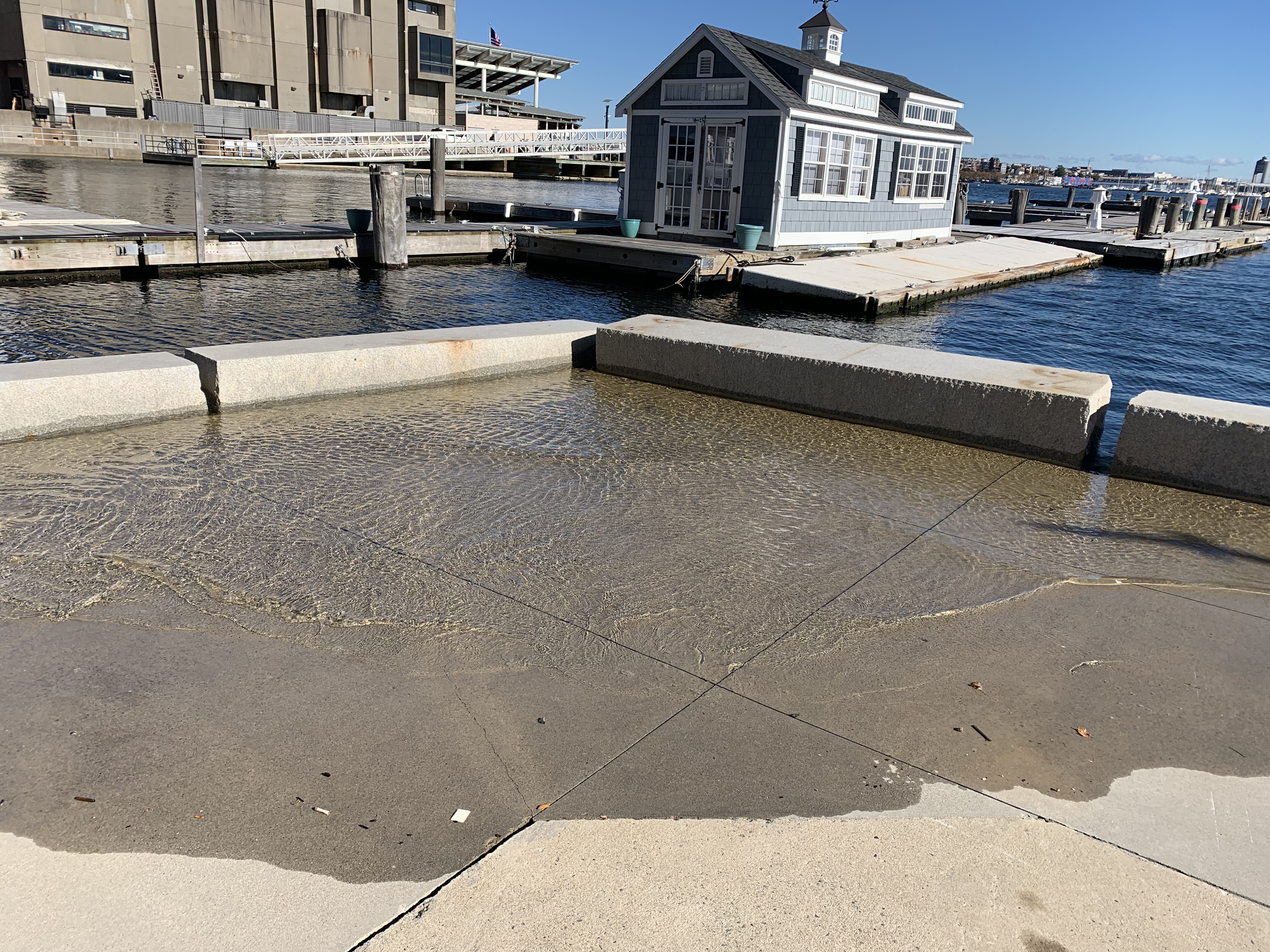 By themselves, king tides could cause minor coastal floods that can be managed. However, coupled with the risks delineated in the Climate Ready Boston 2016 report, if the waterfront isn’t prepared, the damage can be catastrophic. That report highlighted the following four risk factors which were considered most relevant to Boston: sea-level rise, extreme precipitation, coastal storms, and extreme temperatures. These risk factors are predicted to become more intense over the next decades, and the report indicates that Boston ‘s Waterfront is not prepared for it. For example, it is predicted that within the next 10 years the main sea level (MSL) will increase by 10 inches, and by 2 feet in the next 30 years. If left in its current state, flooding will become a daily issue at the Boston waterfront.

To illustrate the risks, the organizers of the tour took us to our first stop at the Harbor Towers. The Harbor Towers are two reinforced concrete residential buildings constructed in 1970 in Boston’s Seaport district. We were standing on the harbor walk facing the first speaker, one of the residents of the towers, with our backs to the ocean. Standing in front of Tower II, he placed a photo of where we were standing on showing its status in the 2018 seaport flooding, when a King Tide coincided with a Nor’easter, a common type of storm along the New England Seaboard. The water level at the time reached the top of the benches and flooded the underground garage. He also showed us the predicted 2070 flood level which was about 10 feet above the harbor walk.

He explained the repercussions of the rising water levels on his home, including the garage which also houses the generators and other equipment that are at risk if another flooding would occur. Fortunately, this king tide occurred during a sunny day, if it happened during another Nor’easter, like one that struck the previous week, the flooding would have caused similar or worse damages to the 2018 flooding. The speaker presented some of the solutions that they have decided to incorporate in preparation for the future, including relocating equipment to the roof and installing flood resistant glass. Additionally, as shown in the figure above, the 2070 flood inundates a large portion of the first floor, preventing access or escape from the building. As the speaker concluded his talk, he asked us to look behind us to find the ocean water slowly inching towards us on the harbor walk as the king tide reached its peak.

As we walked along, we had to avoid the storm drains as the water started flowing out and accumulating in the low-lying areas around the drains. This brought another issue to mind, of the storm sewer system and the effects of the rising sea levels on the functionality of these systems in the future.

Our next stop was the Boston Aquarium, and the speaker was its Planning Manager, Gabriela Coletta. The speaker talked about the Aquarium’s focus on revitalizing the harbor walk to ensure that it remains inclusive, accessible, and climate resilient while remaining committed to marine animal conservation. The speaker also touched upon the measures taken to combat flooding events that the MBTA devised. At the Blue Line’s Aquarium Station, we were shown the temporary posts that the MBTA installed around the perimeter. When a flooding event occurs, steel panels are installed between the posts which form a flood barrier. The installation of these posts was intended as a short-term solution and was able to achieve the MBTA’s following goals: 1) Cost effective and easy to install, 2) Quick response to a flooding event, 3) Can be installed in multiple phases, allowing the MBTA to keep the station open for as long as possible during a flooding event, and 4) Allow the MBTA to design a long-term solution at an extended schedule.

As our tour concluded, these key takeaways came to mind: Unfortunately, it appears that the risks listed in the 2016 Climate Ready Boston are somewhat irreversible and measures should be taken to protect the Boston Waterfront and increase its resiliency by devising innovative and environmentally friendly solutions. Even though we are currently facing theses inevitable risks, efforts should be taken by each one of us with sustainability in mind both in our professional and personal lives. The King Tide Tour was an eye-opening experience and had an impact on my perspective, making climate change a crisis that is very close to home.