Sheltering from the Storm: “Rain Bombs” and Developing Mitigation Approaches

You may have seen, read, or heard about the most recent extreme rainfall event in the United States that occurred in southeast Texas and Louisiana in mid-May 2021. Preliminary estimates of the total rainfall in the area of Lake Charles, Louisiana topped 13 inches, with rainfall rates of over 3 inches per hour.  The result of all this rain was more flooding in an area besieged just last year by two landfalling hurricanes.

While the Gulf Coast of the U.S. is often in the news for flooding issues, the phenomenon of flooding due to heavy, localized rainfall is not limited to a small part of the U.S.  Not far from GZA’s headquarters in Norwood, Massachusetts, upwards of six inches of rainfall on June 28th, 2020 resulted in flooding of the Norwood Hospital.  Patients had to be evacuated and the hospital had to close to make repairs. Similar episodes have played out all over the country in recent years, in areas not otherwise known to have significant flood risk.

Our Changing Climate and “Rain Bombs” 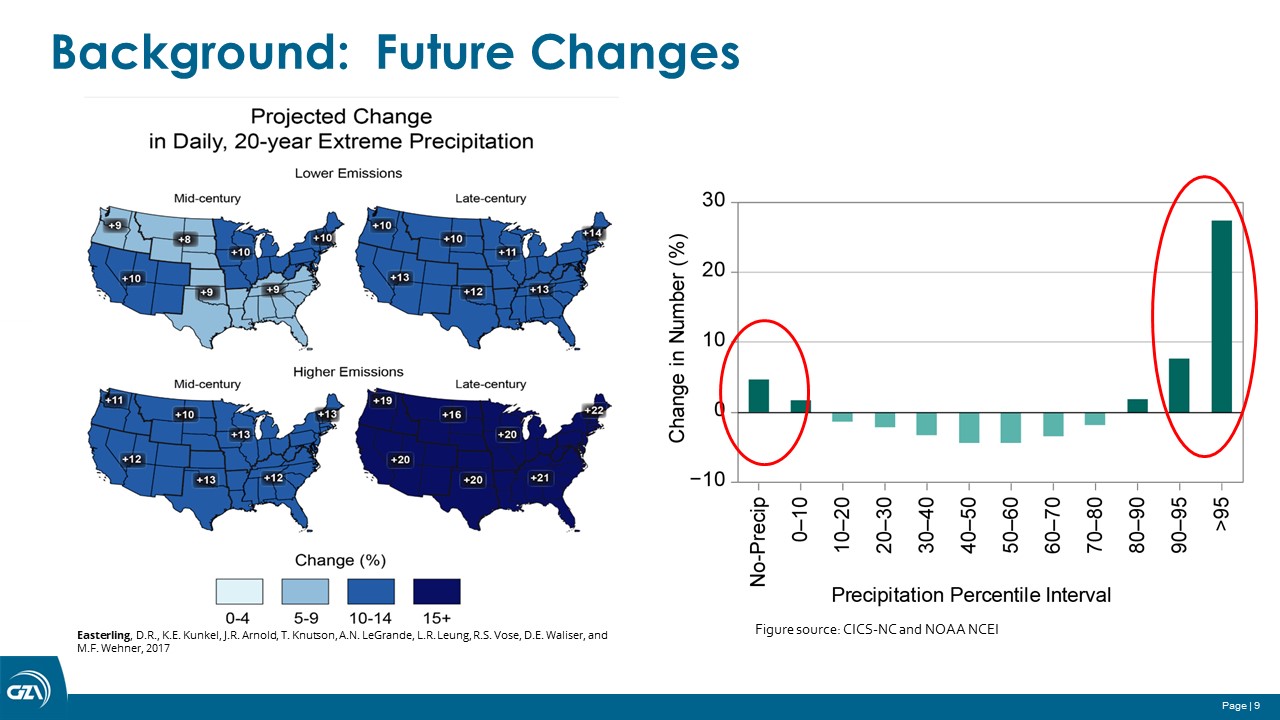 There are many terms for this type of intense rainfall generated flooding, from urban flooding to cloudbursts to local intense precipitation.  However, the most attention-grabbing phrase we’ve heard (albeit one that is not meteorologically recognized) is “rain bomb.”

A rain bomb is usually associated with the weather phenomenon known more properly as a “wet microburst.” This is a wet column of sinking air, or downdraft, associated with thunderstorms that have serious potential for doing damage.  Other intense rainfall events have resulted from larger storms like hurricanes, or simply a series of storms along a stalled weather front that gets “stuck” over a certain area.

Whatever the specific meteorological cause, there is a general consensus that our changing climate is likely to increase the probability of intense rainfall.  Going forward, we’ll probably see more very wet days and more dry periods, with fewer moderate rainfalls in between.

Our traditional means of dealing with flooding have missed rainfall-induced local flooding.  It was thought of as a “nuisance” instead of a threat to life and property. For example, past Federal Emergency Management Agency Flood Insurance Rate Maps do not depict areas prone to rainfall-induced flooding, beyond streams, rivers, and other water bodies.  Similarly, while there are government-sponsored systems in place for pre-event warning of coastal flooding and river flooding, there is not yet a similarly advanced pre-event warning system for rainfall-induced local flooding. That’s because it’s hard to predict where these systems will setup well in advance, and it requires a lot of attention to detail to understand local rainfall-to-flood hydrology and hydraulics.

GZA is currently working on an innovative Flood Response Automated Prediction process to help our clients respond to the challenges posed to their assets by intense rainfall.  We presented our approach recently at the Association of State Floodplain Managers Annual Conference in May 2021 .  The concept behind the process is simple:  leverage the forecast data that is available from entities like the National Weather Service and provide the missing piece from the current process:  High resolution numerical modeling performed on a pre-event basis to translate rainfall to on-the-ground flood condition predictions.

Once the flood forecast process is setup, the results can be visualized in a variety of different ways to support communications with the public or stakeholders, and to assist in preparation and planning to head off potential losses.  It can also help identify what flood protections are needed, and to help to know when to deploy them.

More work and research is needed to continue to streamline the prediction process.  For example, machine learning and artificial intelligence techniques can be integrated within the tool to reduce the burdens on resources associated with high-resolution computer modeling. These kinds of innovations are needed to help make our society as a whole more resilient to our changing climate.